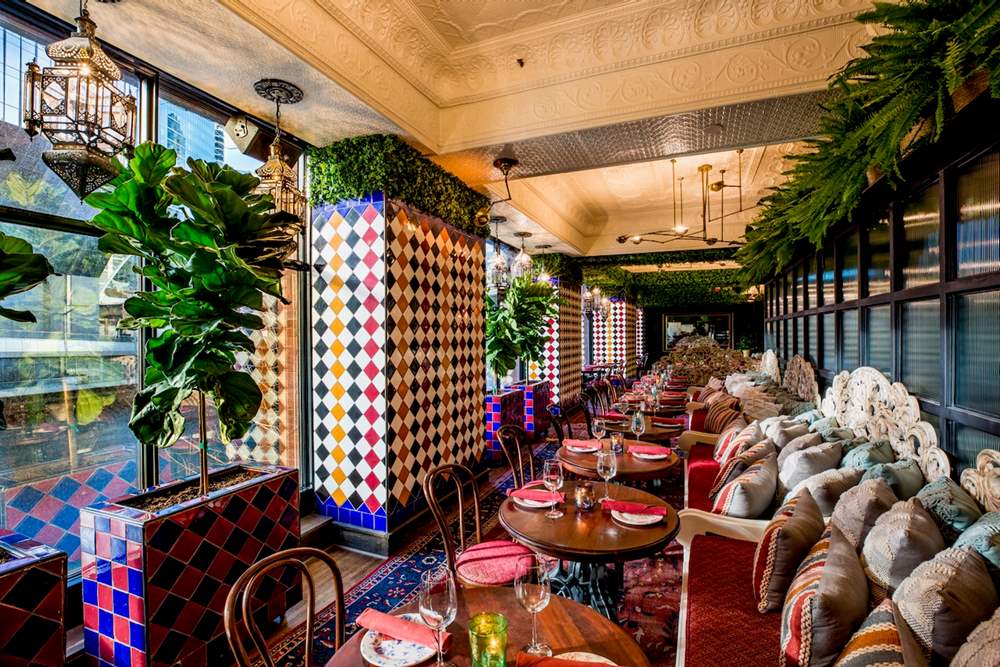 Named after the bohemian freethinkers of the 1950s and 60s, Beatnik On The River offers guests an exotic escape and breathtaking views of the Chicago River with progressive, globetrotting food and cocktails paired with an opulent-meets-Old-World design with just the right amount of happenstance. Created by Maison Bonhomme, Beatnik captures this worldly spirit by taking guests on a voyage through a series of vignettes that marry the bucolic splendor of a Mediterranean farmhouse with the colorful opulence of Moorish architecture and the tropical lushness of Bali.

“The 1950s were a time of immense change in American culture and around the world, a period of incredible economic growth and prosperity when the status quo was challenged by a new generation, whose eccentric, bohemian and unconventional spirit inspired Beatnik. Here we reach out into the past and into the wider world, as the ‘beat’ generation did in their own time, to bring uncommon and cosmopolitan stories to Chicago,” says Daniel Alonso, the founder of Bonhomme Group. “This golden age was memorialized by post-War stars of fashion, literature, art, screen and musical score, whose unconventional works, impeccable style and jet-set lifestyle are a constant education for us. The iconoclasts of this era shaped and started a cultural revolution, from hippies to hipsters, that never ceases to inspire.”

The contrasting styles and textures of Beatnik feature antique pieces from around the world and more than 600 living plants throughout the 8,000-square-foot, 200-seat space. In the process, Beatnik On The River expands on the definition of what a Chicago restaurant should and could look like. Beatnik’s vast collection of exceptional antiques were carefully curated over two years, and when coupled with custom-designed pieces, push the boundaries of maximalist restaurant design in Chicago. One of Beatnik On The River’s most dazzling design features is an Antique Jewelry Store from Nashville (circa 1913). The entire 20-by-20-foot store — including massive crystal chandeliers, crystal sconces and bird’s eye maple interiors — was restored and put back together by a local master carpenter piece by piece and furnished with a 19th century 16-foot French draper’s table with eight turned legs, three drawers and a lower shelf down the middle to create a one-of-a-kind private dining room.